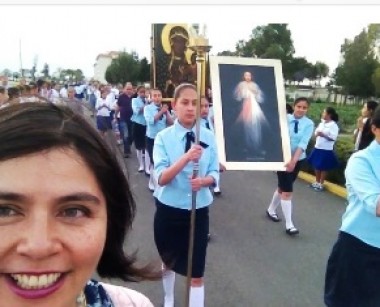 The third year of Our Lady of Czestochowa visit in Mexico just passed. This is happening all the time. The icon is visiting successive parishes and communities. Mexico is a very big country. Wherever She appears the Act of Entrusting of the protection of the civilization of life and love into the hands of the Most Blessed Virgin Mary is renewed. Rosary and Adoration of The Blessed Sacrament in the intention of families through the intercession of Our Lady of Czestochowa is initiated in parishes by the VidaFlorida, movement of Mexican families.

Czestochowa icon in Mexico is hosted as Mom of St. Pope John Paul II. A very long period of the visit is mainly due to cultural factors. Where time flows more slowly, unlike in Europe. But observing what is going on, we come to the conclusion that Our Lady of Czestochowa in her image wants to be in Mexico and it is of utmost importance.

A great battle for the status of marriage continues in Mexico for already 10 years,. Here it should be noted that Mexican legislation recognizes marriage only as "free civil union". The mere fact of living together and having children is sufficient to recognize the relationship as a marriage. Similarly, in neighboring South American countries. Many people, especially the poor do not have a formal wedding, because the law still recognizes their relationship as marriage. Mexico is a Catholic country, but a wedding in the church is a kind of luxury, which many poor Indians simply can not afford, and the general feeling is that it is a private matter. This raises a lot of pastoral problems, however, commonly there is a consensus that it is a union between a man and a woman.

Imitating communism Mexican authorities are highly susceptible to the promotion of gender ideology. Federal District of Mexico City as first introduced the legalization of civil unions. Then changed the definition of marriage in the Civil Code from "free union between man and woman" to "a free union between two people." Same-sex unions are granted rights previously enjoyed only by married couples, including the possibility of adopting children. Mexican Supreme Court issued a ruling recognizing the constitutionality of the so-called. gay marriage and their legality in the country. Consecutive states began enacting similar legislation, but most refuse such an interpretation of the law. Nevertheless, continued registration of the same-sex unions, especially in the regions, encounters great resistance and formal difficulties.

In May this year, the Mexicans took to the streets in defense of the traditional family, as the President of Mexico submitted a draft bill to the parliament introducing to the Constitution the legalization of same-sex unions. The so-called white march was attended in the capital by approx. half a million people. It was the most numerous protest in recent years. Mexicans strongly opposed the change in the constitution equating same-sex relationships with family and the introduction of the gender ideology in schools and violation of the rights of parents. It should be noted that in Mexico to oppose the authority is not safe. Many people die without a trace. In this case, the authorities were powerless, because the crowd was too big.

Currently Legislative Affairs Committee of the Parliament of Mexico strongly rejected a draft law proposed by the president, who clearly questioned the marriage as a union between a man and a woman. This is a big success, which for now definitely keeps this controversial change out of constitution.

Fight and prayer is still ongoing. The Czestochowa Icon still travels through Mexico.

Talks and negotiations are continuing so that next year the Mother of God will start the third stage of the pilgrimage. The countries of Central and South America.