Journey of Czestochowa icon through Mexico is coming to an end. The third stage of the pilgrimage lasted the longest - 2 years and 3 months. Our Lady visited successive cities and parishes. Mexico is a big, vast country with 122 million inhabitants and an area of almost 2 million square kilometers.

Beatriz Gonzalez and Jose Luis Garcia Chagoyan, co-presidents of Fundación VidaFlorida had served in coordination of Our Lady's Mexico journey. We have to admit that they were very selfless and devoted to the cause. 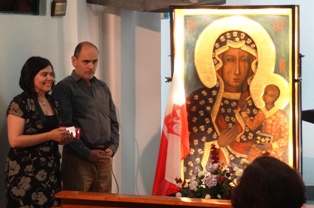 After summing up the journey through Mexico we calculated that the Icon has visited 30 cities in 10 states along the route of more than 20 000 km. To sum up - the first stage of the pilgrimage from Vladivostok to Fatima was 65 000 km, Phase II - the United States and Canada 95 000 km and third stage in Mexico 20 000 km which gives a total of 180 000 km. This sounds impressive, and especially that the pilgrimage is continued.

Despite the richness of the Visitations of Our Lady in México, only few of her movements were able to be reported in detail. The Holy Mother of God did not mind that, especially when visiting remote parishes, inhabited by people in the most vulnerable situations. In Mexico the astonishing miracle of Our Lady who brought to the 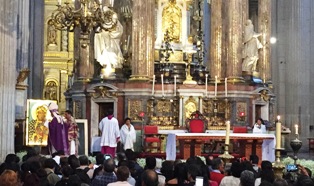 Church millions of Indians to become Catholics in 1531 with Her presence in the blessed Tilma of Saint Juan Diego,  is still alive. Mexican nation really love Her, above all in the image of Guadalupe. Our Lady of Czestochowa was greeted here with joy, admiration and reverence as the mom of St.  John Paul II, for whom Mexicans have a permanent warm place in their hearts. They would prefer to keep the icon permanently. After one of the last meetings a nice woman from  VidaFlorida Foundation came up and said with nostalgia: Are you sure that she must go further on, and should not be with us in Mexico? - But poor Ecuador after the earthquake needs Her very much and is waiting - I replied. She admitted that I was right. 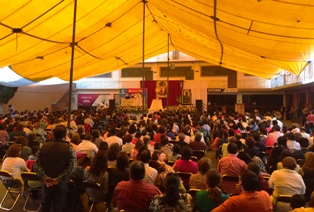 In recent days the Icon's journey  in Mexico gained greater momentum. For the first half of March, Our Lady was hosted in Puebla, the state capital of the same name. It's a big city with a great history and tradition, inhabited by 2 million people. The Icon visited subsequent congregations, monasteries, churches, also a shelter for the elderly, help home for pregnant women, a center for disabled children, and even schools. She stood in a historical XVI century Cathedral of The Angels, greeted by crowds.

She was surrounded by prayer in the Chapel of Perpetual Adoration and met with the defenders of life who just start-prayer "40 Days for Life." Also visited the Palafoxiana Seminary and the Autonomous University del Estado in Puebla  which sponsored transportation during these series of Visitations. On March 16 the Icon returned to the capital, where began the last, at the end visit to Mexico. On Friday, March 17 She was hosted by the Institute of Our Lady of Guadalupe for Foreign Missions and Universidad Intercontinental . The university and the seminary continuously prepares missionaries to work in different countries around the world.

Solemn Mass in the church belonging to the Institute was presided by Bishop Antonio Ortega Franco of the Diocese of Mexico City IV Vicariate and was concelebrated by many missionaries, teachers of Universidad Intercontinental. Bishop Ortega during the liturgy emphasized the importance of the presence of the pilgrim icon, ex. he initiated the renewal of baptismal vows. As well as in other places in Mexico the act of entrustment was recited.

That same evening, Our Lady was invited to the Church of the Ascension for the meeting of Bible study, Rosary and the Eucharist.
The night Our Lady spent nearby, surrounded by prayer in the Chapel of Perpetual Adoration of the Blessed Sacrament with the sisters in the convent of the Mexican Institute of Eternal Adoration of Our Lady of Guadalupe, founded by María de las Mercedes Mendes Perez Gil, 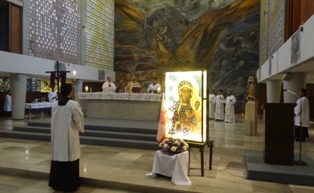 which is located in the old and charming district Coyoacan where many buildings are from the XVI - XVII century.

Saturday morning began with a solemn Mass. at the Franciscans in the Church of St. Catherine also in the Coyoacán district. To welcome the Mother of God the church was beautifully decorated with bouquets and wreaths woven with tiny white flowers, into which white, traditional lilies were inserted. During the Mass. Juan Pablo Lacadiere beautifully sang and played the guitar. At the end of the Mass the Franciscan father blessed two trays of tasty cookies, offered them to the Mother of God and later invited all to share them  in her name. The act of entrustment was recited . 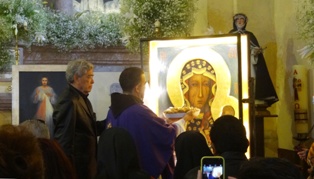 A lot of people gathered, who in turn approached the icon and venerated Our Lady.

In the evening Our Lady visited the Community of St. Egidius, the celebrating their 49 anniversary. Solemn Mass was presided by the Apostolic Nuncio in Mexico, Archbishop Franco Coppola, bringing with him the spiritual pontifical presence.

On Sunday, March 20 the Icon returned to its headquarters in Mexico - the parish of St. Pope John Paul II and St. Thomas More. The official end of the pilgrimage in Mexico took place during Mass at 1:30 pm. 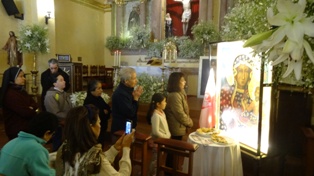 Already on Saturday evening, Indira Mollah, arrived to Mexico. Indira and her husband Loel Frauca and their family, representing Acción Vida y Familia rooted in Panamá have the task to assist in transporting the Icon to Panama and Ecuador. 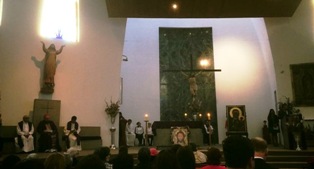