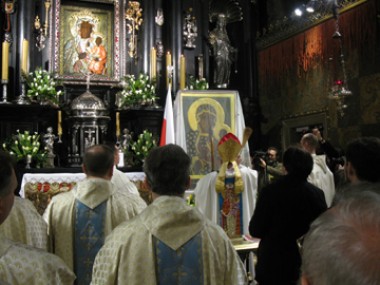 Leaders of pro-life movements of 16 European and Asian countries: Ukraine, Belarus, Lithuania, Latvia, Russia, Kazakhstan, Czech Republic, Slovakia, Hungary, Austria, Switzerland, Spain, Italy, Poland Portugal, UK, and U.S., met on Saturday January 28 at Jasna Gora. The protection of the civilization of life and love in the world was entrusted into the loving hands of the Most Blessed Virgin Mary. This act was prayed in English by Fr. Peter West from USA - Vice President of Human Life International, the largest worldwide pro-life organization, in Russian by Galina Maslennikova from Moscow – Head of Family Center at the Catholic Cathedral, in Polish by Ewa Kowalewska - representing the Club of Friends of Human Life - HLI-Poland.

Solemn Holy Mass was celebrated in the Chapel of Jasna Gora, presided by Archbishop Stanislaw Nowak Metropolitan of Czestochowa assisted by Bishop Mark Solarczyk and Bishop John Watroba and many Polish and foreign priests - families and pro-life movement pastors.  Also present were the priests of the Orthodox Church from Ukraine and Belarus, the pro-life spiritual leaders of movements in their countries.

During the ceremony, Archbishop. S. Nowak blessed the Czestochowa Icon copy in the intention of life. According to the old tradition the Pauline Fathers touched the copy to the original. This is important to the Orthodox Church--Archbishop. S. Nowak called it “the kiss of love”. During the Jasna Gora Appeal, the Prior of Jasna Gora, Fr Roman Majewski, addressed the Orthodox priests present in the Russian language welcoming them warmly, and entrusting into their hands the blessed icon.

EAST AND WEST IN DEFENSE OF LIFE

This icon is written using the traditional egg tempera mineral pigments, and sheets of 23 karat gold. The backing is a solid, carved linden board in the size of the original. This icon is for pilgrimage in the pro-life intention "from ocean to ocean" - from Vladivostok to Fatima.

ESTABLISHMENT OF THE INTERNATIONAL COMMITTEE

The celebration at Jasna Gora was preceded by a meeting of pro-life movement Presidents, mostly belonging to the Human Life International family, during which the possibility of such a pilgrimage was discussed. Fr. Zachary Jablonski introduced the guests to the tradition of carrying an icon to the front lines, asking God for help, where there is the greatest threat to life. Also described the Polish experience of Czestochowa icon pilgrimage and its fruits.

Igor Beloborodov of Russia shared the experience of organizing rallies in the intention of the defense of life in Russia and Ukraine. He also pointed out the real possibility of the icon's pilgrimage from the Far East of Russia, Eastern Europe, Central down to Fatima - from the Pacific to the Atlantic.

After discussion, the International Organizing Committee was set up of representatives of all countries and Orthodox movements present. Each member of the International Committee will appoint a national committee responsible for the pilgrimage of the icon in their country. No specific time and route of pilgrimage was established leaving the decision in the hands of the Orthodox movement in Moscow.

ENTRUSTING TO OUR LADY THE CIVILIZATION OF LIFE